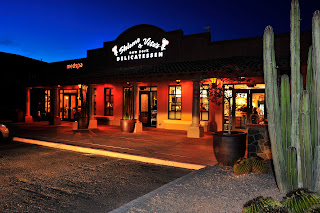 Expanding upon its success as an delicatessen with East Coast authenticity at every turn, Shlomo & Vito’s New York Delicatessen is expanding. Its reopening will be held mid-August.
Merging the delicatessen with the new Vito’s pizza kitchen, Shlomo & Vito’s will serve New York’s most popular offerings, all while bringing the true New York style of cuisine to Tucson. The menu features the finest of Jewish, Italian, and American cuisine — from sandwiches and New York-style pies to pizza.
Co-owner Dean Greenberg knew as a kid the food he ate was something special, a feeling he strives to bring to Shlomo & Vito’s to every patron who walks through the door.
“I grew up eating the best Jewish and Italian food you could imagine at every diner and deli from Long Island to New York City,” Greenberg said. “Bringing this great food to the Foothills was a given and four years ago I partnered with my longtime friend and Tucson restaurateur, Matt McKinnon to make it happen. Now, our success has allowed us to expand and offer even more New York-inspired fare to Tucson.”
The reopening, set for mid-August, will partner with the Leukemia Lymphoma Society, with 10 % of proceeds of every pizza purchased during
August 17-26 going back to the organization.
“We are pleased to partner with the Leukemia Lymphoma Society, which is near and dear to our heart in the great work they do researching the cure for leukemia lymphoma,” said Matt McKinnon, Co-owner of Shlomo & Vito’s.
Sunday, August 19, 6:00-8:00 P.M. Shlomo & Vito’s will host “Tucson Hunger Game” in the Courtyard of Plaza Colonial, 2870 E. Skyline Drive). The Ultimate Man vs. Food Competition!
Local high school football teams will compete for their chance to win proceeds of funds raised that day. Lineman from each school will compete in 4 Quarters with four rounds of food. The High School Football Lineman who eats the most in the competition will win the money for his school.
Percentage Night
For every PIZZA purchased during AUGUST 17-26 Shlomo & Vito’s will donates a 10% to Leukemia Lymphoma Society.
As a part of the reopening, Shlomo & Vito’s New York Delicatessen will also offer delivery service for breakfasts, lunches and dinners to neighbor’s homes or offices. Whatever the event, from business or team meetings to birthday parties, rehearsal dinners, weddings and Bar and Bat Mitzvahs, the restaurant’s diverse, comprehensive catering menu is sure to please guests. Shlomo & Vito’s exceptional catering department will create the perfect menu for any event.
Shlomo & Vito’s, 2870 East Skyline Drive in Tucson, is open seven days a week for breakfast, lunch and dinner. Breakfast and lunch entrées range from $8-$11 while dinner dishes range from $12 – $16. For more information, visit http://www.shlomoandvitos.com/
Follow me.

I've been in and around the the Phoenix wine and restaurant for over 17 years. I've seen and learned a lot and now I'm sharing it for the world to see. View all posts by Sandy Wasserman

Let me know what you think Cancel reply